The store will not work correctly in the case when cookies are disabled.
Cookies help us deliver our services. By using our services, you agree to our use of cookies. Learn more
Welcome to our new website! Click here to visit our previous version.
All Stores are Now Open + Free Shipping Sitewide*
Menu
Settings
Currency
USD - US Dollar

Fast Ball Speeds. Higher Swing Speeds.
RAD Speed Drivers Product Page
The RAD Speed drivers aren’t named for their “rad” look and design. RAD actually comes from the term Radial Weighting, which is where Cobra engineers focused their efforts to improve performance over previous Cobra drivers. Specifically, Cobra has increased the Radius of Gyration by positioning the sole weights farther behind the center of gravity, increasing MOI and optimizing spin and ball speeds in each of the three driver models. Additionally, all three models feature Cobra’s CNC Milled Infinity Face, a design that creates a giant sweet spot for improves performance on all impact locations. The standard RAD Speed Driver includes two sole weights of 28 grams and 12 grams are interchangeable from the forward and back positions to help golfers create ideal launch and spin characteristics for their games. The RAD Speed XB model has 20 grams of weight (14 fixed, six interchangeable) positioned in the back of the clubhead for extreme forgiveness and high launch, while the RAD Speed XD model includes 14 grams placed back and 10 in the heel to promote a draw bias. 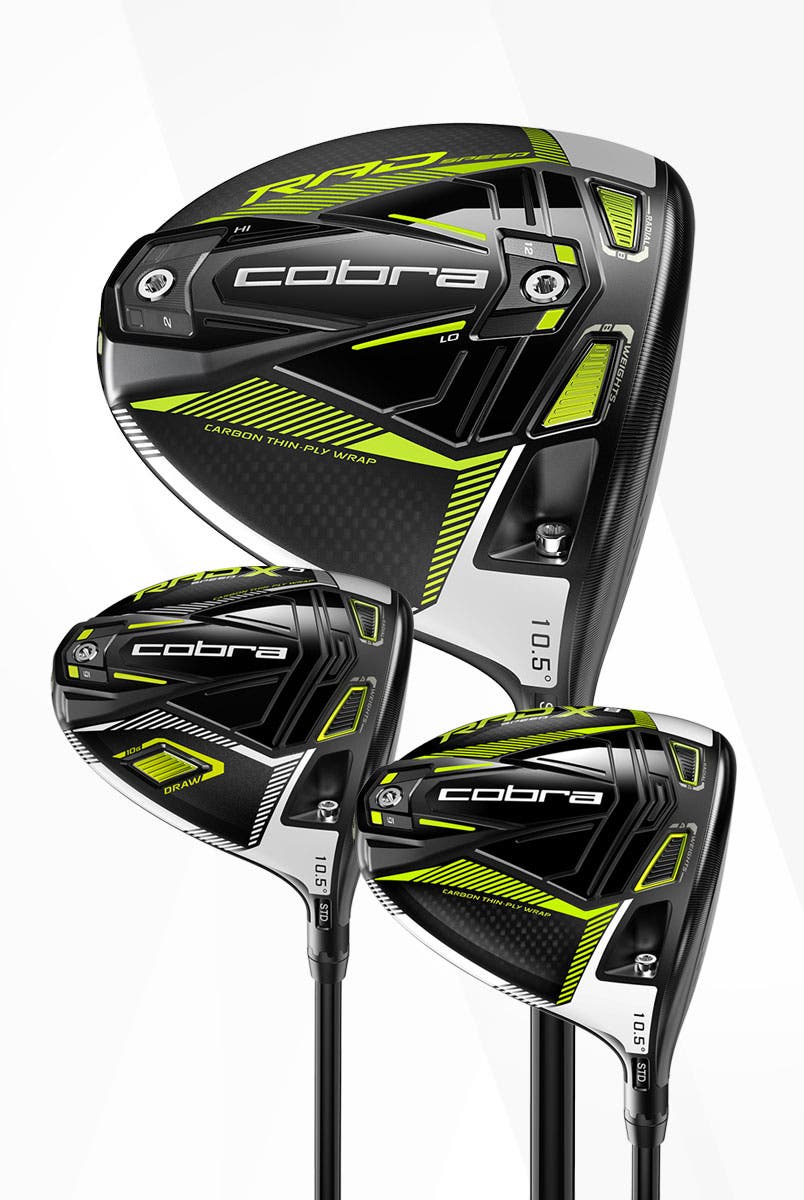 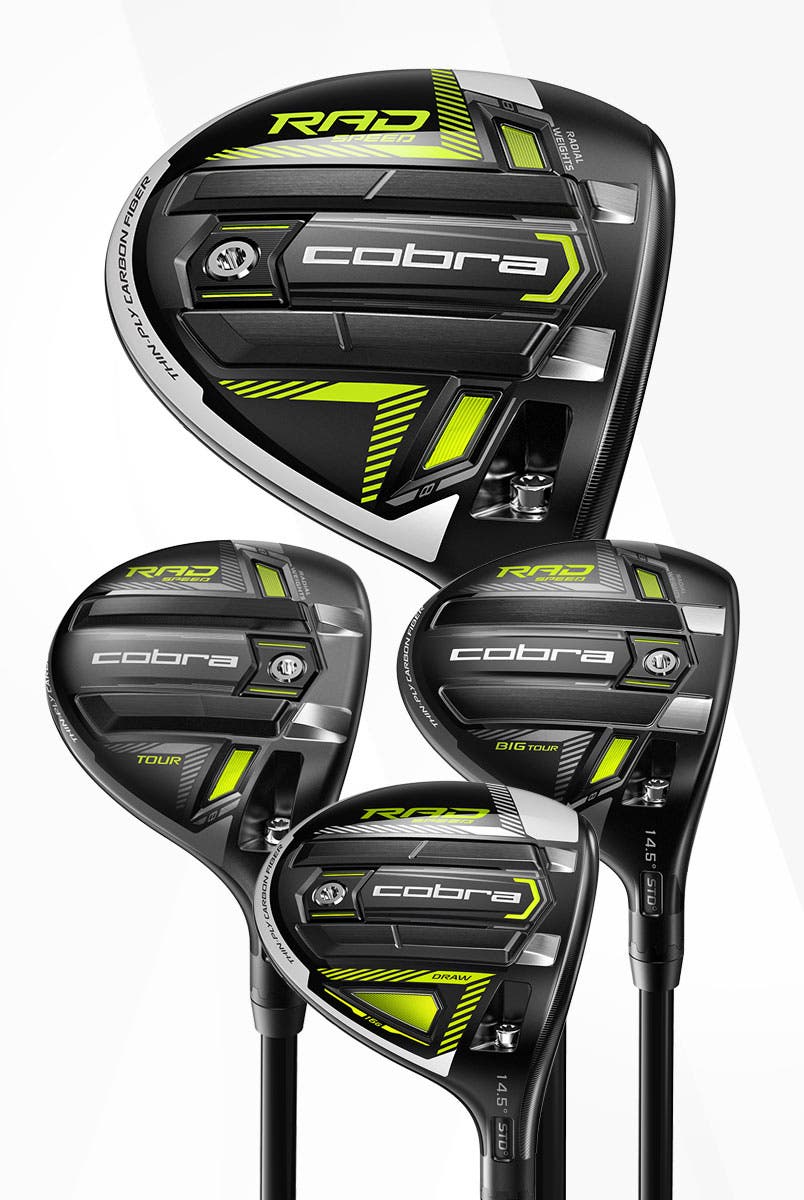 The standard RAD Speed fairway wood includes two eight-gram internal front weights and a seven-gram back weight, creating a balance that provides the combination of low spin and high launch. The RAD Speed Draw model creates draw bias through 16 grams of heel weighting. The RAD Speed Tour model is a 5-wood that has 17.5 degrees of loft, while the RAD Speed Big Tour is a larger, 13.5-degree clubhead that is designed for players that like to use a fairway wood off the tee.

Front-Biased Radial Weighting
Rad Speed Hybrids Product Page
The Cobra RAD Speed hybrid includes Cobra’s trademark Baffler rails on the sole that run parallel to each other. They prevent digging into the ground and create smooth turf interaction from the fairway, rough, or even bunkers. In terms of Radial Weighting, the RAD Speed hybrid includes two six-gram internal front RAD weights and a seven-gram back weight that combine to deliver low spin and high launch.

The RAD Speed hybrids are available in standard length and One Length. The One Length concept, created with the help of Bryson DeChambeau, aims to provide a consistent swing plane throughout the bag for golfers by making all wedges, irons, and hybrids the same length. 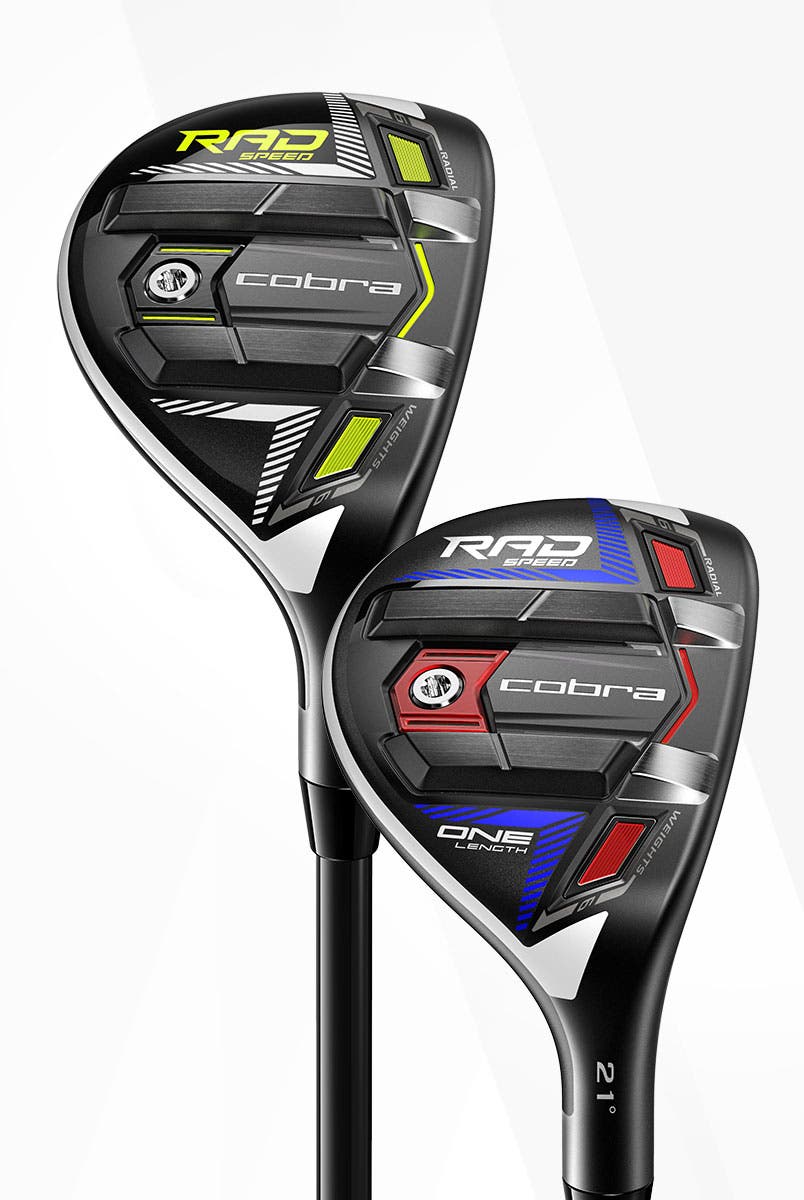 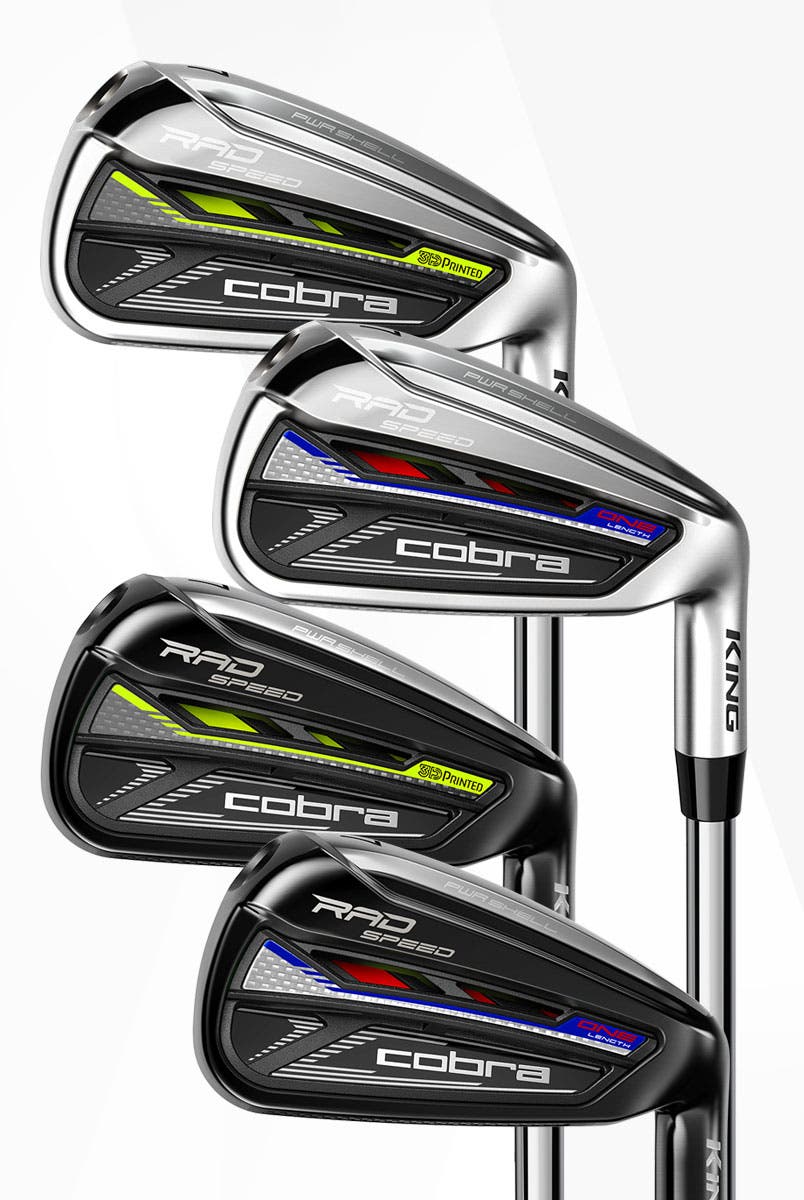 Extreme Heel & Toe Weighting
Rad Speed Irons Product Page
The Radial Weighting in the RAD Speed irons consists of 3 grams of weight is positioned in the toe and heel areas, respectively, to create the best combination of speed, low spin, and stability. Meanwhile, the center of gravity is also centered to help performance on mis-hits. Cobra’s PWRSHELL technology also returns in the RAD Speed irons, which consists of a forged face insert made of 17-4 stainless steel. It increases face flexing around the sweet spot for faster ball speeds and higher launch.

The RAD Speed irons are also available in One Length, a concept created with the help of Bryson DeChambeau in which all irons are the same length to create a repeatable swing plane. Cobra engineers were able to optimize lie angles in order to help create the performance necessary for each club.

High Launch, Low Spin
SpeedZone Drivers Product Page
Cobra had tremendous success in 2019 with its Speedback F9 driver, but it firmly believes its 2020 SpeedZone drivers will be even better. Most notable about SpeedZone is a dramatic increase in the use of carbon fiber, which helped engineers position additional weight low and deep in the clubhead to increase MOI, and a new Infinity Edge clubface design, which expands the milled area of the face by 95 percent to ensure consistently fast ball speeds.

Also of note, the SpeedZone franchise will include two driver models to choose from, which was not the case with F9. The standard SpeedZone driver features movable weights in the sole and a more compact, tour-inspired profile that will likely appeal to better players and those with higher swing speeds, while the SpeedZone XTreme offers a larger more forgiving footprint and fixed weight in the back of the clubhead to maximize forgiveness. 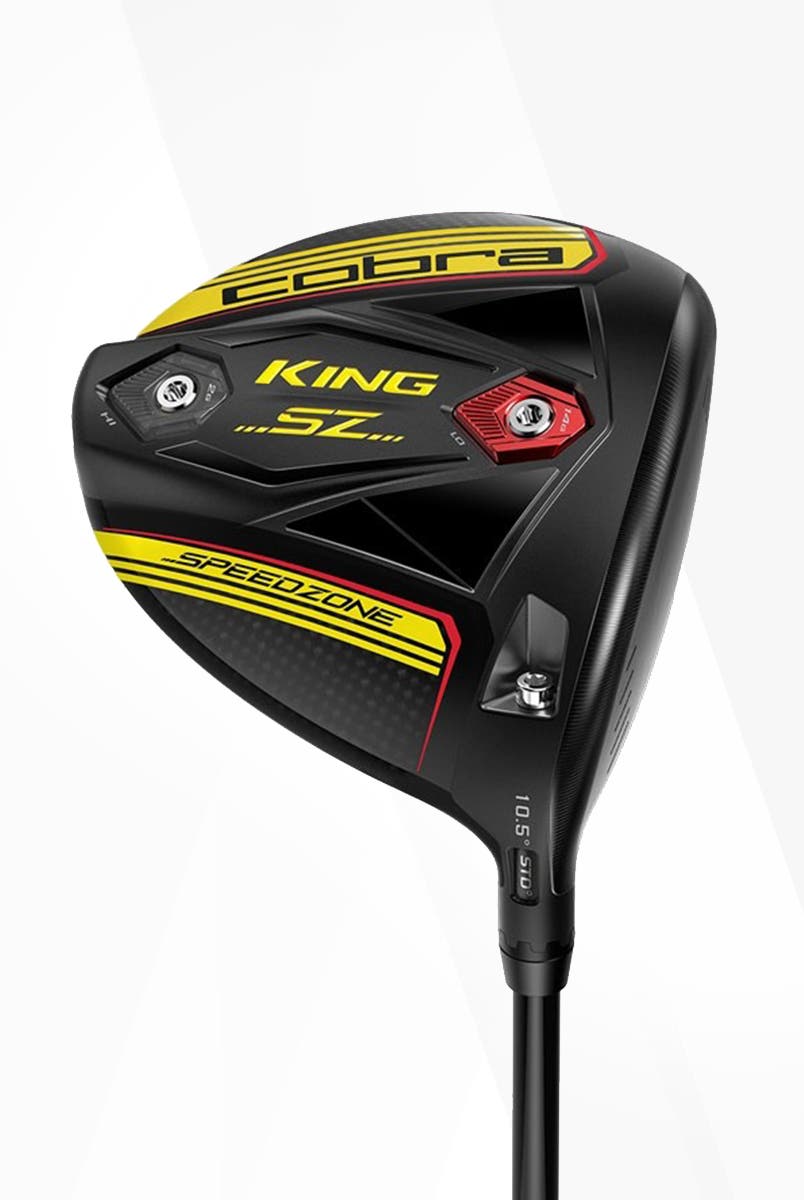 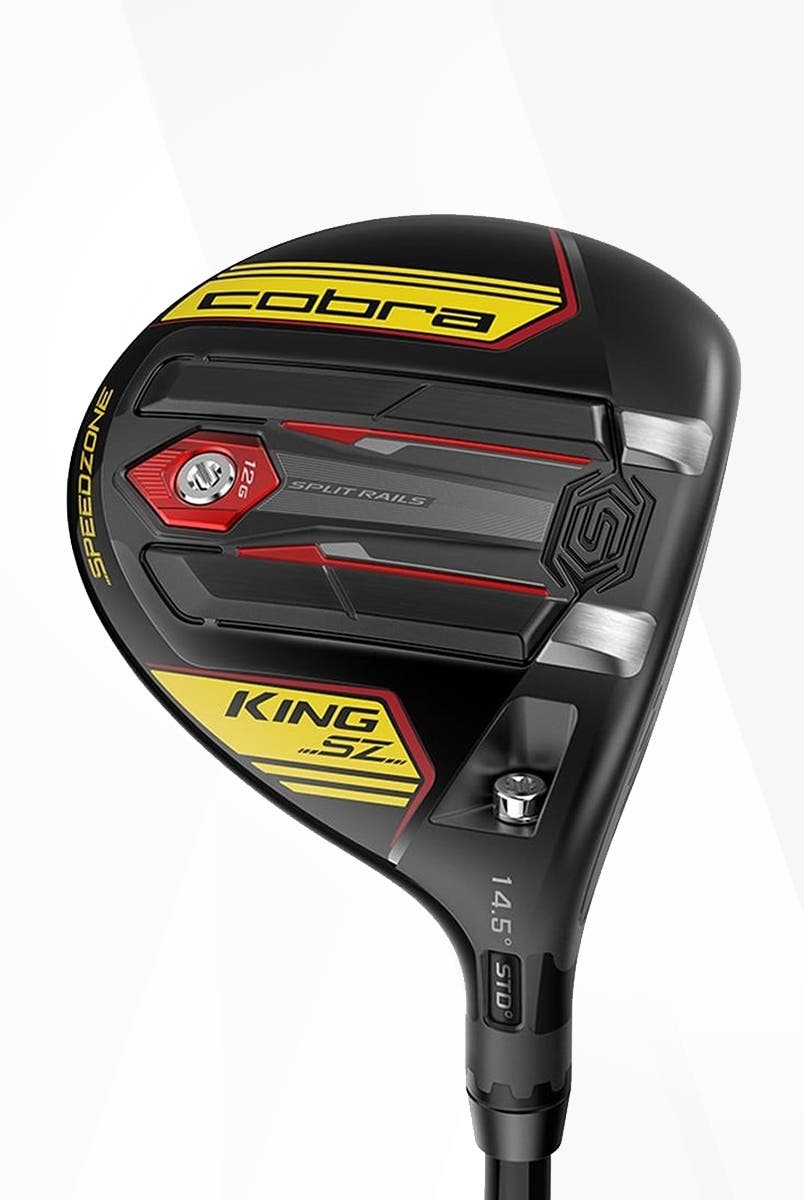 Larger Sweet Spot, More Ball Speed
SpeedZone Fairway Woods Product Page
Cobra has carved out a loyal following with its fairway woods in recent years, as players have fallen in love with Baffler Rail Technology and its many benefits relating to turf interaction. New for 2020 in the SpeedZone fairway lineup is Cobra’s Hollow Split Rail design, as the rails are now hollow to create more flex at impact, which results in a larger sweet spot and more ball speed without any sacrifice in how the rails help players maintain speed through the turf. There are also three SpeedZone fairway models to choose from to suit the needs of any player. The standard SpeedZone features back weighting and a traditional shape, which will appeal to a wide array of golfers, while the SpeedZone Tour features a compact, more workable profile and front weighting to reduce spin. Cobra has also added a Big Tour option, which was created with a larger profile to provide maximum distance and will be a great option for players off the tee.<

Effortless Launch, Promotes Consistency
Speed Zone Hybrids Product Page
From a technology standpoint, the design of the new SpeedZone hybrids mirrors what has been done with the fairway woods, with Hollow Split Rails being the key feature. By making the rails hollow, Cobra was able to create more flex at impact, which leads to faster ball speeds from a larger portion of the clubface. A fixed back weight also promotes effortless launch conditions, while a slightly larger shape enables increased perimeter weighting and higher MOI. Cobra will also once again offer a One Length version of the SpeedZone hybrid to help golfers who play One Length irons better incorporate a hybrid(s) into their bag. For those who might be unfamiliar with the One Length concept, it’s a strategy that has long been utilized by PGA Tour standout Bryson DeChambeau, as he plays most of his clubs at the same length, which he and Cobra believe promotes consistency by allowing players to utilize one setup and swing. 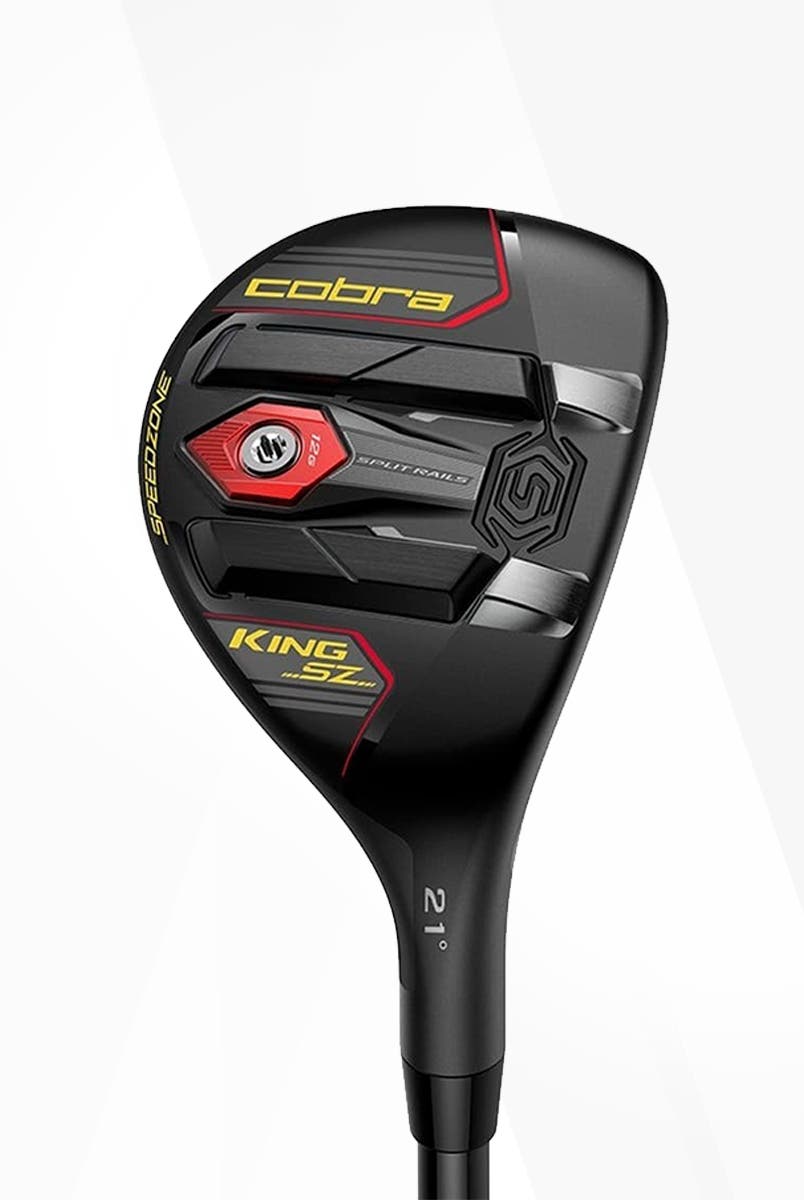 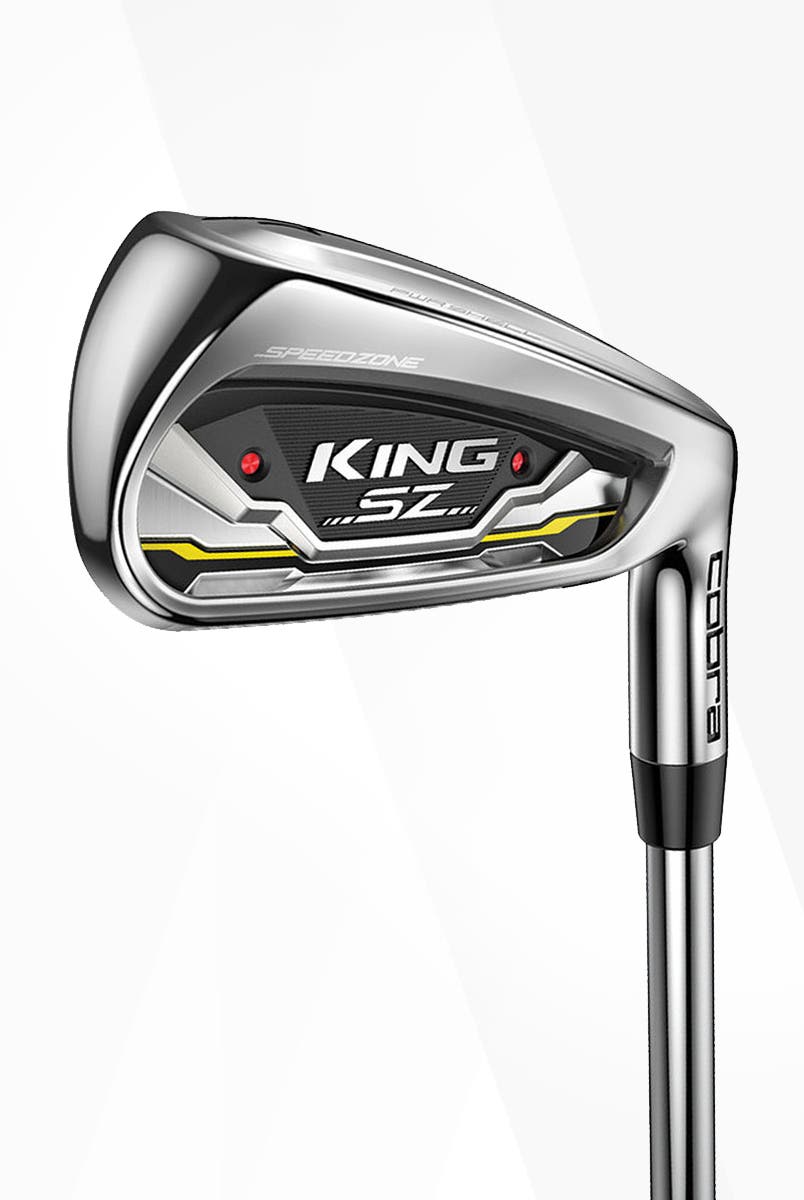 Faster Ball Speeds, Improved Stability
SpeedZone Irons Product Page
Cobra’s new SpeedZone irons are loaded with technology to make it easier for players of all ability levels to improve their iron play. In terms of performance, incredible distance and forgiveness are coupled with a traditional shape and soft feel that most game-improvement irons simply can’t match. The most unique innovation in the SpeedZone irons would likely be their new carbon topline, which saves weight to create a lower CG and faster ball speeds. SpeedZone irons also feature extreme heel-toe weighting to offer improved stability at impact and better results on mis-hits, while a forged PWRSHELL face insert helps promote ball speed and high launch conditions. Also included in the design is a co-mold medallion in the cavity that reduces impact vibrations to enhance sound and feel, and there is, as one would expect, a One Length version available as well for players who have moved to the One Length iron concept.<

Enhanced Forgiveness, Higher Launch
Forged Tec Irons Product Page
With each passing year, the players distance iron category continues to grow significantly, and golf manufacturers are increasingly devoting resources to their new offerings within that space. Just released from Cobra are the new 2020 King Forged Tec irons, which feature a hollow cavity design that promotes a low, deep CG position and a forged Pwrshell Face that delivers a larger sweet spot, with the end result being impressive ball speed, high launch, and max forgiveness. While that might sound like a recipe for a traditional game-improvement iron, the Forged Tec irons also provide golfers with a classic, compact shape, as well as the soft feel and acoustics that players irons are known for, the latter of which comes courtesy of foam microspheres that fill the hollow cavity. Additionally, tungsten toe weighting has been utilized in the long and mid irons to further enhance forgiveness and naturally high launch conditions. 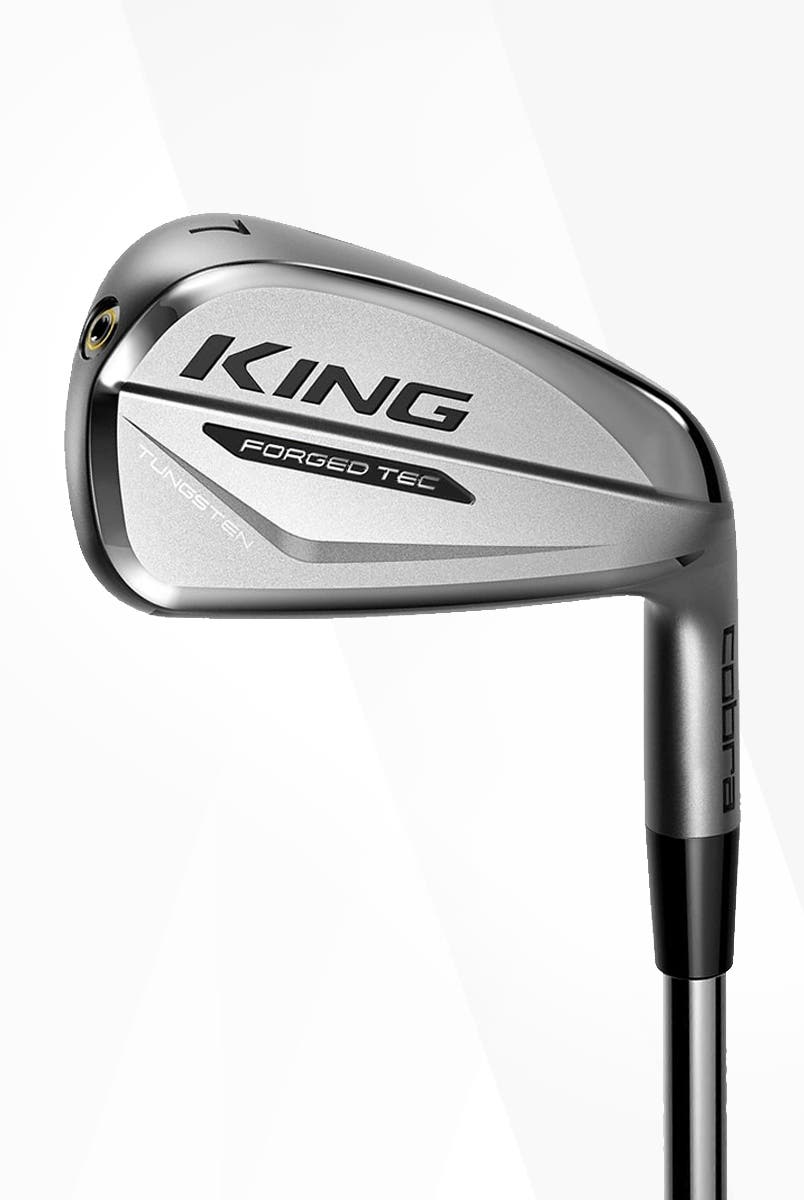 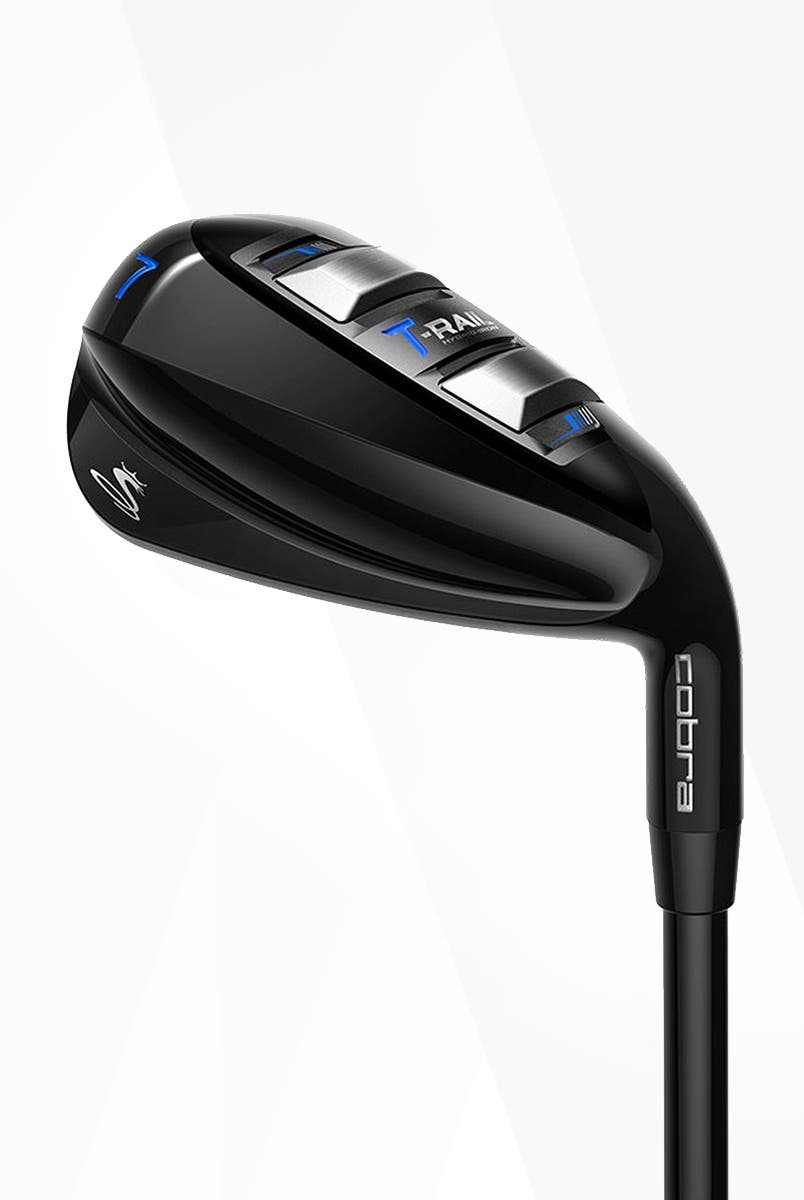 Improved Turf Interaction & Consistency
T-Rail Iron Hybrid Product Page
The new T-Rail iron-hybrid set from Cobra essentially represents a new category for the company, as it set out to offer golfers the precision that irons promote and the distance and launch that hybrids deliver in one set of irons. Keying the distance provided by T-Rail is a hollow-body design that allows for a thin, forged E9 clubface, which delivers faster ball speed across the face and effortless launch. Most unique, however, about the T-Rail irons is Baffler Technology, which has been highly successful in Cobra’s recent hybrid and fairway wood releases. More specifically, Baffler Rails have been implemented on the sole of each T-Rail iron to ensure improved turf interaction from any lie while also allowing players to maintain speed through impact. Wider soles also enable a low, deep CG position that not only help with launch but also provide impact stability.<

Our store return policy differs from our online policy. Any used clubs purchased within our retail stores have a 30 day play guarantee. This allows you to bring the club back within those 30 days for 100% back in store credit (subject to store approval).

Headcovers are not included with the purchase of a club. We do offer headcovers for $4.99 with any club that is purchased in the store.

We do offer a same day demo program. Both of our retail stores are near driving ranges, so if you wanted to try a club before purchase you are able to do so. They must be returned before the end of the same business day.

2nd Swing Golf does not accept checks as a form of payment.